Finding The Magic Outside Your Comfort Zone - Magnificent Midlife

Finding The Magic Outside Your Comfort Zone

Magnificent Midlifers Go On An Adventure….

The older I get, the more I find myself setting challenges. I’ve found setting a specific challenge that is going to really take me outside my comfort zone is both hugely motivating for action and immensely satisfying once complete. As Will Smith likes to say, “the comfort zone is a beautiful place but nothing ever happens there.”  The really magical stuff is found just outside.

I reckon the challenge-setting thing is probably going to be an annual event now. The trouble is I keep setting bigger challenges, so who knows where I’ll end up. Last year it was my first half marathon at 50. And this year it was a 25 km country hike. Not sure how I’ll top either.

On the last weekend in September (I really should have known better weather-wise) I took part in the DofE Adventure  – a 25 km hike through the UK Peak District.  The Duke of Edinburgh scheme is familiar to most UK schoolchildren. It runs a series of awards, bronze, silver and gold for which young people have to plan and carry out expeditions as well as completing other challenges. It’s great for building skills, confidence and stamina. For big kids too it turned out.

Our Adventure was the adult version (complete with a bar tent at the end) and we were raising money to enable more young people to take part in similar expeditions. I even managed to convince four other Magnificent Midlifers from our private Facebook group the Flock, to come with me. More crazy women! Here are two of them.

Setting off with my fellow walkers Caroline and Anna. There were two more Magnificent Midlifers in front on the hike but we failed to catch them until the evening, speedy pair that they were!

The walk was pretty challenging in itself. It was the longest distance I’ve ever walked in one day. We had to carry backpacks with provisions and changes of clothing including waterproofs (thank goodness), and if you’ve ever been to the Peak District, you’ll know it’s quite up and down!

I’d been nervously checking the weather forecast for days and while it started out reasonably positive, as the big day approached, it looked more and more likely we would be trudging through rain. I have a wonderful app on my phone called Dark Sky and it gives hyper-local weather forecasts. If it’s raining now in your location, it can tell you with a pretty high degree of accuracy how many minutes it will be before the rain stops.

When I opened up Dark Sky last Saturday morning and saw solid rain from 3pm until well into Sunday, my heart sank. The heavens opened even before we reached the starting line and waterproofs were quickly dug out of rucksacks. But it was not so much the walk in the rain that worried me, as the night to follow. You see, we were also spending a night under canvas! In a sleeping bag. On a sleeping mat. In a field. In the rain. Yikes!

It didn’t rain constantly, at least during the day, but it was enough to make us fairly soggy and to really test out our waterproof clothing. Luckily we had motivational slogans and glorious scenery to distract us even when traipsing through mud, as well as wonderful refreshment stops along the way. We even took a short detour to climb the very highest peak.

We had lots of giggles along the way. I discovered I’m not cut out to be a camera woman. Check this out: 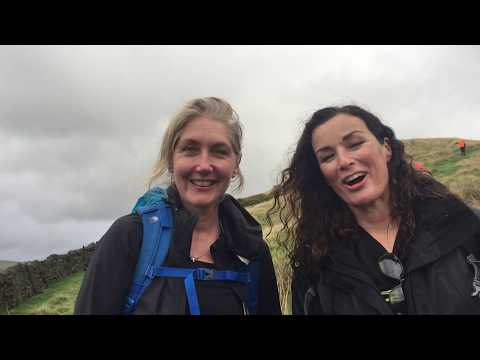 I was exhilarated but exhausted on reaching base camp where we were to spend the night. Sore thighs twinged every time I had to cross a stile on the downward slope. But down at the bottom was a large marquee, live music, great hot food, wine and our Magnificent Midlife team mates who we’d failed to catch up with during the day. Told you it was the adult version! The DofE Scheme had done a brilliant job organising the day and over 600 people took part!

We finally caught up with the speedy Liz and Maureen in the bar tent. What a great Saturday night!

But have you ever tried camping with 600 people in individual tents in a waterlogged field? I guess it wasn’t that different to the regular Glastonbury experience. I went twice to that 20 years apart and when I went the second time, I remembered why I’d left it 20 years.

Suffice to say there was an awful lot of mud. Just trying to make my way to the loo block felt like an epic journey. And my weak midlife bladder didn’t help.

The organisers kindly put up our tents so we only had to stagger into them. We were also allocated a sleeping mat each. But 50+ year old bones are not designed to sleep on a sleeping mat and it wasn’t exactly the most restful night I’ve experienced. Give me a nice soft mattress, on a bed, in a house any day.

I made the rookie mistake of leaving my walking boots between the two tent layers and woke up to soggy boots too. Waking up to yet more rain in the morning, I was delighted I wasn’t joining the 300 of my camp mates doing another 25 km on the Sunday. There’s always a silver lining right. Brave hardy souls they were!

My morning view after a very soggy night.

But you know what? I felt amazing having completed the walk and survived a night in a tent. I’ve always loathed camping. Men in my life have tried to persuade me to embrace sleeping outdoors but I never got a taste for it. I once camped in a desert and that was manageable. But I’m a real softy when it comes to not liking being cold and wet.

But I managed it without too much complaining, I have some amazing photos to share, and I got to spend time with the four amazing women who came with me on this journey.  We really did find the magic outside our collective comfort zone.

At the top of the highest peak. We made it!

Getting Truly Revolutionary About Menopause

Natural Treatment For Menopause – All You Need To Know

Coming Off HRT – How I Did It