What Singing Means To Me - Magnificent Midlife

What Singing Means To Me

I have various things in what I call my midlife toolkit. Things that keep me going and that I turn to, to help me make the most of midlife. These might be books, ideas, activities, foodstuffs, people and of course the whole Magnificent Midlife community. That is in fact what keeps everything on the rails for me. Having spent many of the first 48 years of my life doing what I thought I ought to do, I am now at last doing what I’m passionate about. Woo hoo!

Something else I’m passionate about and which is very much part of my midlife toolkit, is singing. I sang as a child in the church choir and then later in school musical productions. At 16 I was Sally Bowles in my school production of Cabaret!

I auditioned for the same part when I got to college, but was relegated to being one of the Two Ladies. It was a bit of a comedown but still a lot of fun. But when I heard the fulsome voice of Sally at college, I realised mine was rather weak in comparison. I didn’t know then that it’s perfectly possible to train your voice to be something completely different.

Then from 21 to about 41 I didn’t sing. My dad was always a big singer, singing in church and other choirs. But I was still in that phase of not wanting to do stuff my parents had done. My life had to be original not a copy of theirs. Biting off my nose to spite my face in retrospect.

My dad was sad I no longer sang but eventually gave up reminding me about it.  But as his health began to deteriorate, something tugged at me. I wanted to have a go again and I could kill two birds with one stone because it would please my dad too.

My first foray into singing in my early 40s was following the tradition I knew. I joined the local choral society. My dad was delighted and I happily discovered that with a bit of practice I could still reach those lovely top notes after all. In those days I only knew about the high head voice. I had no idea about the lower, stronger chest voice.

But then one day I was happily googling different singing style choirs in North London, hoping to extend my repertoire, and I saw an ad for a gospel music workshop very close to home. That looks interesting I thought. You see, I’d always harboured this dream of being a jazz singer. And I liked the idea of doing something other than choral music which left my dearly beloved, a professional sound man, deeply uninspired. Gospel was kind of like jazz, right?

So plucking up my courage, I went along to my first gospel workshop. And my mind was veritably blown. It was such fun! It was an amazing workout! And I had a chest voice! It took me a while to feel confident singing in my chest voice but it was there! And the more I sang, the better it got. And the more I practised, the more I could transition between my chest voice and my head voice – the more warbly one of choral singing rather than the full one of gospel.

And so began my gospel singing journey. I tried to combine both choral and gospel for a while. Both were on a Tuesday night and I’d leave one choir early and hurry to the other! But then a choir director advised me to pick one style or the other. Doing both meant I’d struggle to excel at either. So gospel it was.

Full disclosure, I’m not a believer in any formalised religion. I believe in people and love and integrity, things like that. So I like to think of myself as the ultimate hypocrite. But my logic goes something like this too: if God does exist, he’s not going to mind the odd heathen getting pleasure from singing about him, don’t you think!

I’ve long thought it would be nice to have religious faith. I reckon life (and certainly death) could potentially be personally a lot easier if I did. So I try and keep myself open to the possibility. But weekly singing the praises of the Lord has still not brought me to belief, so I guess it’s probably never going to happen.

But that doesn’t stop me loving gospel music and the experience of singing in a choir. I would recommend it to absolutely everyone. And there are very few people who really cannot sing. It’s incredibly uplifting, great exercise, good for the brain in that you have to memorize the words and harmonies, you meet people from all walks of life you probably wouldn’t otherwise encounter, and if you work hard at it and are in a great choir like I am, you might get to win Gospel Choir of the Year!

It was announced on Sunday 10th December that my choir had done exactly that. We had to keep it secret for quite some time before the result was announced on BBC Songs of Praise. But now it’s official! And it was Seal who presented the trophy!

I have to confess, if anybody had told the teenage Rachel I would one day be proud of singing as an adult on Songs of Praise, I’d have ROFL (keep up… rolling on the floor laughing). But now I’m happy to stand up there, dance about and sing of my love for someone I don’t actually believe in. But I have a love for the music, for the spirit of love it engenders and the wonderful people I get to sing with every week. It’s a real honour and pleasure.

It’s a shame my dad never got to hear me singing again, either choral or gospel. But then again he’d probably have hated the gospel music; “too much repetition” I can hear him chunter! But I LOVE it!

Seriously, it’s better than drugs and alcohol! And a lot less dangerous!

If you’re lucky enough to live in the south east UK, you could join the organisation of which my choir is a part, The Big Sing. They’re all over the place! And truly wonderful.

You can check out our winning song below! I’m off camera most of the time but you may spot me top right or behind my director at the end. 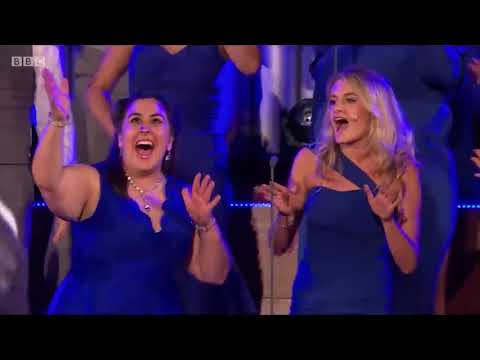 And if there’s any kind of choir near you, just join it!